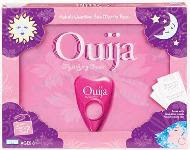 The toy manufacturer Hasbro has launched a Ouija board, packaged in a cutesy pink box which serves to make the thing look innocent and harmless, and targeted at children (especially girls) ages 8 and up. There is also a glow-in-the-dark version available more likely to appeal to boys. How diabolical is that?

Ouija boards are not toys. They should not be used by children, or by anyone for that matter. One should not even have such things in one’s house. Ouija boards are nothing to fool with. The user is like a child tinkering with a telephone, dialling numbers at random, without knowing who will answer, except that in the case of the Ouija board the potential threats are much more severe, and the potential consequences that much more horrifying.

One does not expose oneself to such danger. It is possible that nothing may happen. It is equally possible that some form of demonic infestation may result. One does not want to invite a demon into one’s home, where the creature may then lodge and cause mayhem, requiring an exorcism to banish its baleful presence. One certainly does not wish to expose oneself to the danger of being taken over personally—of being possessed—by such a presence. Despite the scepticism of the moderns, evil spirits are as real as anything in the material world. Documented cases exist in which the unhappy user of the ouija board came to grief and had to be rescued—at great physical, psychological and spiritual cost—by the Catholic Church.

Here is a story related by one of the commentator’s on Fr. Z’s blog about his youthful encounter with a ouija board. It makes chilling reading. Of particular interest is the name that the spirit gave as its own:

I was cleaning out the attic in my parents’ house back in the mid eighties and came upon a box containing a Ouija board. As a child, I had absorbed all the devilish lore connected with these things though I had never actually seen one.

So it was with some trepidation that I lifted the cursed object from its cardboard coffin. It seemed to exude a sulphurous stench and a lambent glow emanated from it there in the dimly lit garret. A icy shiver of palpable terror paralyzed me for several minutes until my sense of rationality brought me back to reality. I resolved to test this oaken oracle and began by asking it simple questions.

Are you the devil? N-O, it spelled out. Well, that was a relief.

Do you know the devil? Y-E-S. The sense of terror crept back.

Do you have a name? Y-E-S. It always helps to find out a person’s name, both in the natural and supernatural realms. Just ask Moses.

Can you tell me your name? Y-E-S. Sociable little ghost, this. The pungent sulphurous reek intensified and a diaphanous vapor rose up from the board.

OK, what is it? Nothing. At least, at first. Then slowly the triangle began to move, seemingly aimlessly then with determination. One by one the letters were selected. B-U-A-N. What? That’s not a name. I asked for the name again. B-U-A-N. I could make no sense of it. I tried yet a third time. B-U-A-N. The stench suddenly became asphyxiating and I was aware of the sound of crackling flames and gnashing teeth. I knew I was in the presence of something malevolent and unholy and I fled from the attic in horror.

The next day I summoned my courage and ventured back into the devil’s aerie. I found the Ouija board completely charred and the floor partially scorched. Though it was a hot and humid day, the attic had a glacial almost unearthly chill. I buried the board in the back yard and put it out of my mind.

Several years later, after the death of my mother, I was walking in the old neighborhood and struck up a conversation with the new owner of the house. He had been mowing and raking and mentioned in passing that in one corner no grass would grow and flowers that his wife had planted immediately withered and died. Where? I asked. As he pointed to the spot I realized with horror that it was there that I had buried the hellish tablet.

I never learned the meaning of the demon’s name: BUAN. But I do believe that there is such a malignant spirit who wanders the world seeking the ruin of souls.

There is no demon that Melancholicus can find that goes by the name Buan, at least none that is known to the internet. There are numerous other occurrences of the name (it is not uncommon as a surname in certain parts of the world) in both private and commercial capacities. Preternaturally, a search for Buan returns just one hit; the moon goddess of Tagalog mythology carries this name. Melancholicus knows nothing of Philippine mythology, but to judge from the Wikipedia excursus wherein she is mentioned, this Buan has been cast in a benign role rather than anything menacing or threatening. 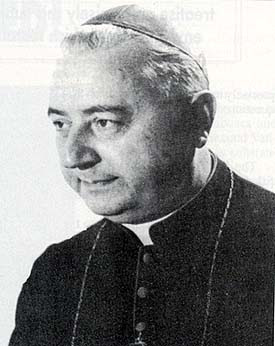 There is at least one instance of the name Buan being used in a demonic capacity, one not unconnected with the ‘reform’ of the Roman liturgy after Vatican II. The rumours of lodge membership which have attached themselves to the architect of the ‘reform’—Archbishop Annibale Bugnini—are well known, and can be found in print as well as on several websites. Bugnini’s name in freemasonry is supposed to have been Buan. Now while a Mason by the name of Buan was named in the dossiers found in Bugnini’s briefcase, it has not been proved conclusively that this Buan was in fact Bugnini himself, who to his dying day denied any association with freemasonry—but for which we have only his word, and nothing more. Dare we take him on trust? The devious cunning to which he resorted to bully and manipulate Paul VI during his years as liturgical commissar would seem to indicate a man neither entirely worthy of trust nor of great integrity.

For more in this regard, see this page on the website of Inside the Vatican, passim.

The above story describes an event which took place in the mid 1980s. Bugnini died in 1982. Could he possibly have been the Buan who spoke to Fr. Z’s commentator? Melancholicus does not believe that the spirits of the dead are at liberty to communicate with the living, even by such media as the ouija board, without special permission from almighty God. One should hope at least that Bugnini himself were not the Buan in question, as the phenomena of stench and burning which accompanied the communications would seem to indicate the great misfortune of a damned soul. Melancholicus is most vexed with Mgr. Bugnini over what he did to the liturgy, but he does not wish the fellow damned for it.

Or else it was a demon. Perhaps this demon is the very one whose name Mgr. Bugnini adopted in the lodge all those years ago. Co-incidence? Maybe so. But it’s a small world.
Posted by Melancholicus at Friday, February 05, 2010

Gustaf Nordenskiold, swe said...
This comment has been removed by a blog administrator.
2:10 PM

When the participants are blindfolded, the Ouija board spells out nonsense.